Trinity Episcopal Church is a diverse and dynamic parish. Inside our stately stone walls you’ll find a warm and accepting community of faith: a place where longtime members and first-time visitors connect with God, one another, and a call to serve our community and the world.

At Trinity, worship and parish life blends our love and respect for ancient and beautiful liturgical traditions with our desire to put faith into action. You’ll find spiritual nourishment through Anglican worship, learning opportunities for all ages, and ever-expanding outreach and justice advocacy ministries. We actively collaborate with city and neighborhood organizations. We sustain our vital campus partnerships while creating new initiatives that respond to critical social needs.

With imagination, joy, and faithful purpose, we live into our mission to accept, nourish, and send all out into the world to do God’s work.

As a worshipping community of diverse Christians, we accept, nourish and send all to do God’s work.

To build and enhance connections with God, with one another, and with communities around and beyond us; To be an urban center of Christian ministry sought after by anyone on a quest for a deepened relationship with God. 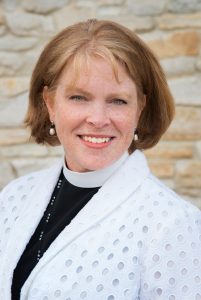 The Reverend Julia E. Whitworth is the 12th rector of Trinity Episcopal Church. She joined Trinity in July, 2016. Julia has a passion for liturgy and music, preaching, and prophetic witness to the Church’s call to be a significant voice for social justice. She is also deeply committed to the integration of children and families in all aspects of the Church, especially through education, liturgy, music and service, and joyful community-building. 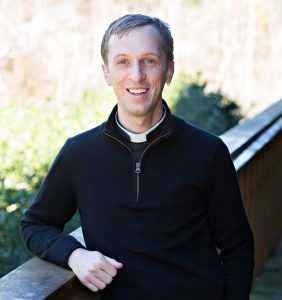 At Trinity, Father Ben oversees pastoral care and shares in the liturgical, preaching and pastoral responsibilities of the clergy. At St. Richard’s, Ben oversees chapel life and religious programs of the school. A native of Kokomo, Indiana, Ben moved to Indianapolis from Sewanee, Tennessee, where he was Assistant Professor of Preaching at the University of the South’s School of Theology. 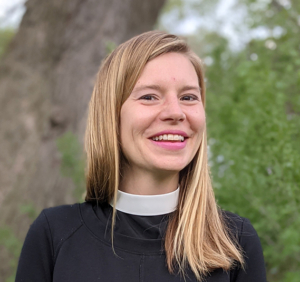 The Rev’d Megan Miller was ordained to the transitional diaconate in March 2020 and was ordained to the priesthood in September 2021 in the Diocese of New York, where she attended Union Theological Seminary. In May, Megan completed the Diploma for Anglican Studies program at Bexley-Seabury.

She also has an elementary education teaching certificate from the University of Pennsylvania and a B.S. from Indiana University, where she studied marketing, gender studies, and religious studies. Megan brings over a decade of teaching and formation experience, in both schools and churches, to her role at Trinity. 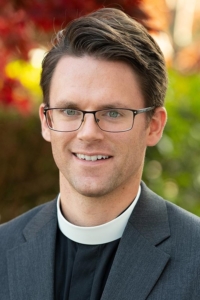 Ordained in June 2018, the Rev’d Adam Pierce is a graduate of Virginia Theological Seminary (2018) with an undergraduate degree in Religion and Philosophy from Flagler College in Saint Augustine FL (2010). Adam has experience working in a complex church system and brings skills in strategic planning, community organizing, Christian formation rooted in racial healing, and building sustainable support for ongoing ministries. Adam is married to Laurie and they have three children, Aleea (6), Hazel (4), and Lucas (2)

“My passion for the ministries of outreach and justice is something I’ve always understood as being tied deeply to my faith in Jesus Christ. Jesus shows us again and again in the Gospels that follow- ing him and trusting in God are intimately connected to serving and caring for all those we meet; in service and in relationship we are made open to one another.” 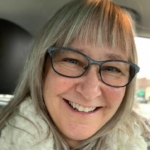 Bethany Baugh is the Executive Assistant to the Rector and Director of Administration and Finance. Raised in the Episcopal Church and primarily in the Midwest, Bethany returned to Indianapolis in 2015 after 25 years in the San Francisco Bay Area. Most recently, Bethany was responsible for graduate admissions and recruiting for the University of Indianapolis. Bethany holds an MBA in Sustainable Management from Presidio Graduate School in San Francisco and is earning an MA in Biology focused on conservation and community engagement from her alma mater, Miami University in Ohio. Bethany enjoys her native garden and exploring the outdoors.

Dirk oversees all operations and finances for the buildings and grounds for Trinity Church, St. Richards School, Trinity Outreach Center and Project Home Indy. He has been with Trinity since 1988 and has helped plan and manage eight additions and renovation projects here on campus. Before Trinity, Dirk served as facilities director for American Camping Association in Bradford Woods for five years and Sycamore Group for three years. Dirk and Wendi are in their 33rd year of marriage with nine children, and two grandchildren. 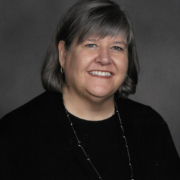 Molly has primary responsibility for the business affairs of the parish—with oversight over all matters pertaining to facilities, finances, human resources, information technology, office administration, and support of ministries. 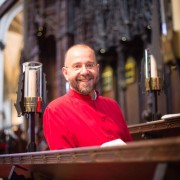 Michael Messina is Director of Music at Trinity and Organist for St. Richard’s Episcopal School, positions he has held for over twenty-three years.

Michael has served as President of the Association of Anglican Musicians, co-Chair and faculty of the Leadership Program for Musicians Serving Small Congregations in the Diocese of Indianapolis, and Dean and Treasurer of the Rochester and Indianapolis chapters of the American Guild of Organists, respectively. For the past several years, Michael has participated in the Indianapolis AGO’s Pipeworks program, an interdisciplinary curriculum presenting the organ and its repertoire to primary and secondary school students.

For twenty-seven years he has served as Organist and Choirmaster in Jewish congregations in Rochester and Indianapolis.

Michael lives with Mark (his husband), Norbu (the Shih Tzu), and Leo (the French bulldog). 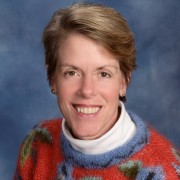 Missy coordinates the Journey to Adulthood youth program and has been certified by Journey to Adulthood’s Leader Resources program. For parish life, she directs all-parish events. Missy has a bachelor’s degree in finance from the University of Louisville and before working at Trinity, she worked 15 years in the retail industry. Along with her husband Fred, she has been a member of Trinity since 1988. The Roetters have two children, Lizzie and Nelson.

The vestry is the leadership council of the parish, and new vestry members are elected at the January annual meeting. They work closely with the rector to define the mission and direction of the parish and manage the parish’s operations, finances, and property. Vestry members are an example of commitment, participation, and support of the life of the parish.

MEET THE VESTRY
Scroll to top